First here’s the first article I put out before the story started to get big.

I have found out I have responses from the tel-lie-vision station WRCB that even INFOWARS doesn’t have. I will be posting them below. I was not the first to break the links; I am the only one so far that has a comment from the station. Conversation provided here below.

Can you guys explain this? 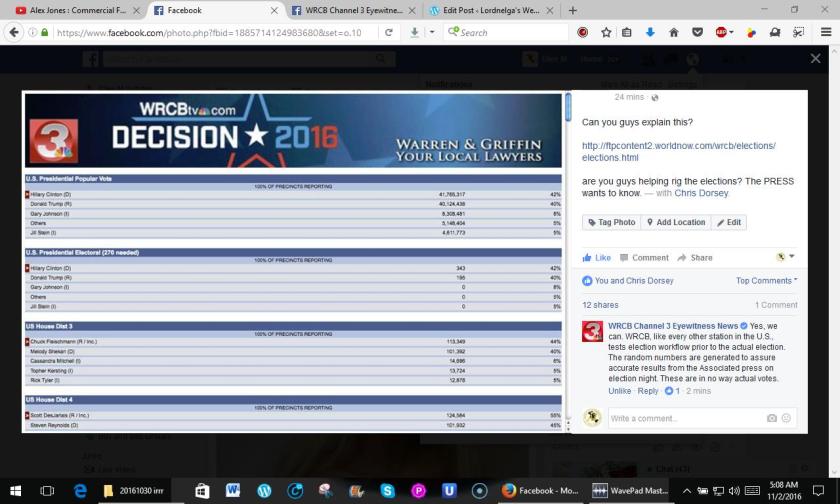 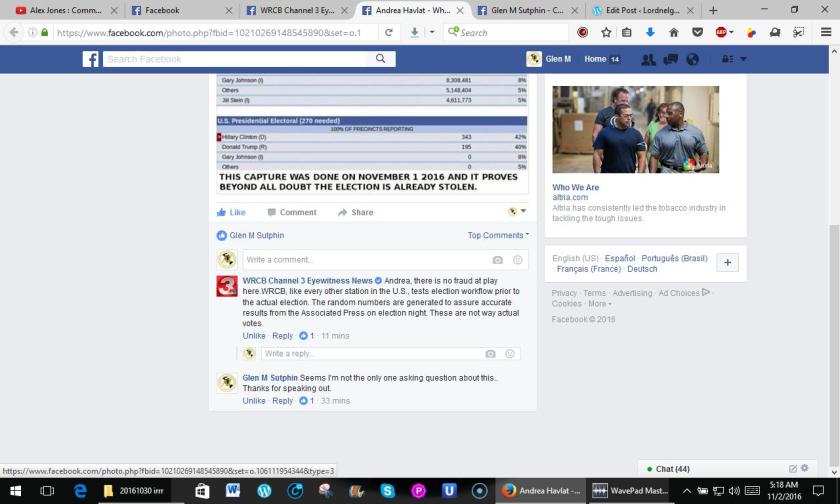 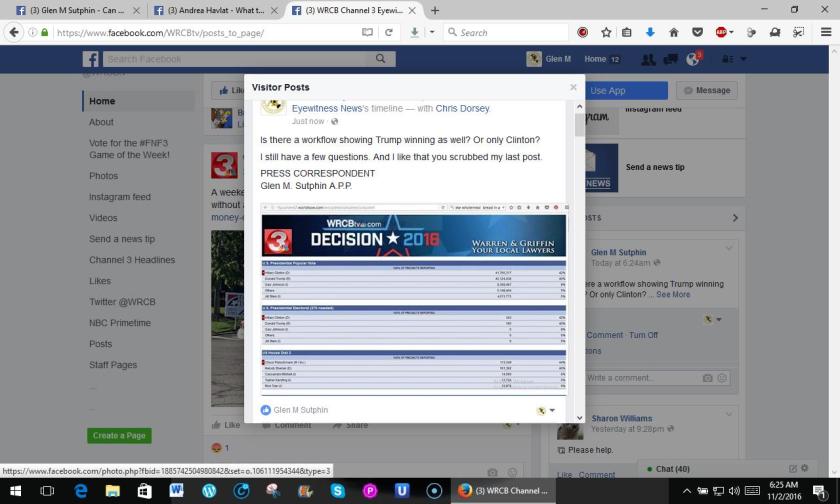 All of this has basically been scrubbed from the internet and off of their fedbook page as well but not from my fedbook pages.
(Continue with captured conversation)

Is there a workflow showing Trump winning as well? Or only Clinton?

As we’ve stated to you before, Glen, those were random numbers generated by the Associated Press to test workflow. Key word is random.

you have provided me with what I require thank you and have a nice day.

I will be working on a video soon of this as well showing my timeline and showing when I know what I did. I want to say I am not against this tel-lie-vision station WRCB as they did what I required and I wished them a good day. Video of our show will be below as we are working on this as it develops.

I do question their tactics but I did broadside them and they never saw it coming. And to be honest they did respond when I called them out so good job guys you did what I asked of you for that an A+. Erasing and purging the page guess that was following orders for that an F- so you get a C for today; still all in all good job. Wish the media here would respond that quickly hell even just respond would be nice. I also will give you a bonus for responding when the MEDIA here will not. So your final grade is…..

Election results in the 2014 election showing winners with zero percent returned votes. So I am showing the history of the election fraud. They use these cooked numbers and graphics to push their narrative and push their agenda.

WRCB is the low man on the totem pole they are the bottom of the problem their higher ups are the real problem so going after them is going after the messenger. They were just the ones caught first with the information that they then scrubbed from the internet. And yes putting out stuff like that is stupid before a hotly contested election, but it provides proof of what is going on so I will give them a pass for now.

It comes down to a question of honor and integrity I challenged them they turned over what I asked they get to walk, they are the little fish and may or may not know what they are saying. They are just repeating what their corps-lawyers are telling them to say. If you need to go after anyone at that station go after the station head manager, the top of the company. I got bigger sharks to catch which I did, because the little fish often gives up the bigger fish which they did.

the random selection of numbers.

Not what they meant but what they said. What I asked them, by what they said, there should be a result for each person running to be the winner, there isn’t that I have found. And while I was conversing with them they put out a news story saying killery was in the lead. Yeah in fixed fake polls I guess she is. Hell in fake polls I’m in the lead and ain’t even running so there.
Now based on this I questioned them about if there were results for if Trump wins but since they are being told that Clinton will win and these are the graphics that are being prepared, they are sticking to their prepared script so you will get no more from them.

Since everything comes down from the Associated Press they are the ones that need to be looked at very hard. I have already contacted them and will post what they say when I get their response here the screen capture of me contacting them. 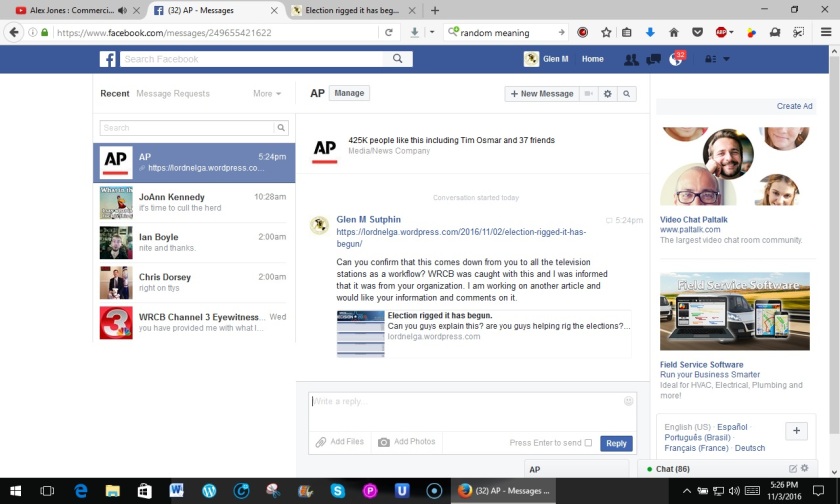 Next question what is the http://franklyinc.com/ system and what does it go? We’ll explore that in another article.

A man called chris Dorsey and I discuss some more of what I put out in the article. Here in this video segment of Get The NEWS Straight.

“glen sutphin and chris dorsey expose the Associated Press as the source of the 2016 Election 100 percent reporting results released by WRCB NBC News a week before the the polling precincts open.”

Quote from a reader who didn’t want to be named but wanted this information to get out there to let people know what is going on in this election. Sorry you had to go through that but they will do low life things like this. And yes it should be illegal. “I just got a rather upsetting call with a whimpering young child’s voice telling me how she was in a dressing room at school and a male walked in and went on and ended up being someone asking me not to vote for Roman Prezioso. That was THE WORST. That should be illegal. I thought it was a real child needing my assistance. Very upsetting. Have any of you gotten this call?”

If you receive a phone call like this, report it to the police at once. There is no reason for this kind of stuff to happen, and some people could be traumatized  by such things thinking they are real.

Be sure to check out our subreddit at http://www.reddit.com/r/Getthenewsstr8