As many of my readers know I have helped many pages, clubs what have you out on fedbook. Several of them like the Amanda Todd Reporting Team, and United Against RIP Trolls and Cyberbullies just to name two. I have helped report to the RCMP the crimes committed against Amanda Todd by the cybertrolls that were abusing her name and image after her death. I have always stood up and did what others can’t or won’t do. I have also stood up and helped my friend Amanda Williams AKA Madisonstar moon which brings me to why I am writing this article now.

For those of you who don’t know her Amanda Williams AKA Madisonstar moon is an activist cover the chemtrails and death-towers that are popping up all over the country. She is also a friend and has had Chris Dorsey and myself on her radio show. Due to the topic she covers she gets a lot of harassment and abuse. Right now there are probably 20 or so fake accounts that fedbook has allowed to exist all in order to harass and destroy her reputation. Because I am speaking out these troglodytes which is actually a poor name for these criminals have taken it upon themselves to now come and threaten me. Okay so I did call them out on my page mind you and their self appointed leader came after me.. So be it you wanted me here I am.

Since fedbook is a useless piece of cesspool filth much like Hidden Vally Condos and will do nothing to stop cyberstalking, cyberharassment and cyberbullying. Report this crap is useless to that crappy ass spy program, I am force yet again to take matters into my own hands and do what I can to protect myself and my friends. I am also calling on the authorities to look into this matter as the person responsible and the self appointed leader supposedly resides in New Zealand. I also now want compensation for the crimes committed against me and Amanda Williams. Which I will come to in a minute. 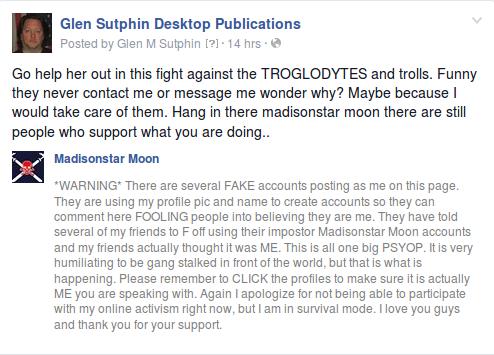 “Go help her out in this fight against the TROGLODYTES and trolls. Funny they never contact me or message me wonder why? Maybe because I would take care of them. Hang in there madisonstar moon there are still people who support what you are doing..”

*WARNING* There are several FAKE accounts posting as me on this page. They are using my profile pic and name to create accounts so they can comment here FOOLING people into believing they are me. They have told several of my friends to F off using their impostor Madisonstar Moon accounts and my friends actually thought it was ME. This is all one big PSYOP. It is very humiliating to be gang stalked in front of the world, but that is what is happening. Please remember to CLICK the profiles to make sure it is actually ME you are speaking with. Again I apologize for not being able to participate with my online activism right now, but I am in survival mode. I love you guys and thank you for your support.”

and the troglodytes response: 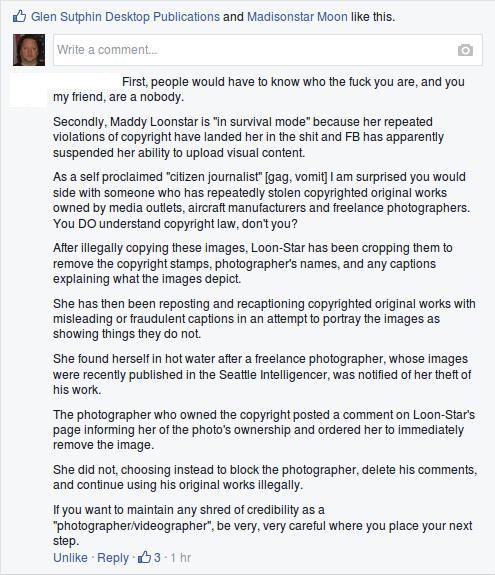 “ First, people would have to know who the fuck you are, and you my friend, are a nobody.

Secondly, Maddy Loonstar is “in survival mode” because her repeated violations of copyright have landed her in the shit and FB has apparently suspended her ability to upload visual content.

As a self proclaimed “citizen journalist” [gag, vomit] I am surprised you would side with someone who has repeatedly stolen copyrighted original works owned by media outlets, aircraft manufacturers and freelance photographers.
You DO understand copyright law, don’t you?

After illegally copying these images, Loon-Star has been cropping them to remove the copyright stamps, photographer’s names, and any captions explaining what the images depict.

She has then been reposting and recaptioning copyrighted original works with misleading or fraudulent captions in an attempt to portray the images as showing things they do not.

She found herself in hot water after a freelance photographer, whose images were recently published in the Seattle Intelligencer, was notified of her theft of his work.

The photographer who owned the copyright posted a comment on Loon-Star’s page informing her of the photo’s ownership and ordered her to immediately remove the image.

She did not, choosing instead to block the photographer, delete his comments, and continue using his original works illegally.

If you want to maintain any shred of credibility as a “photographer/videographer”, be very, very careful where you place your next step.”

Now he has two thing correct in his statement. First one yes I am a nobody, I have never claimed to be anything other then what I am. Second thing “citizen journalist” [gag, vomit] I so agree. Other then that who appointed you guardian of the copyright. Considering you or your retarded butt buddies have taken a photo of me and used it on your page without my permission. 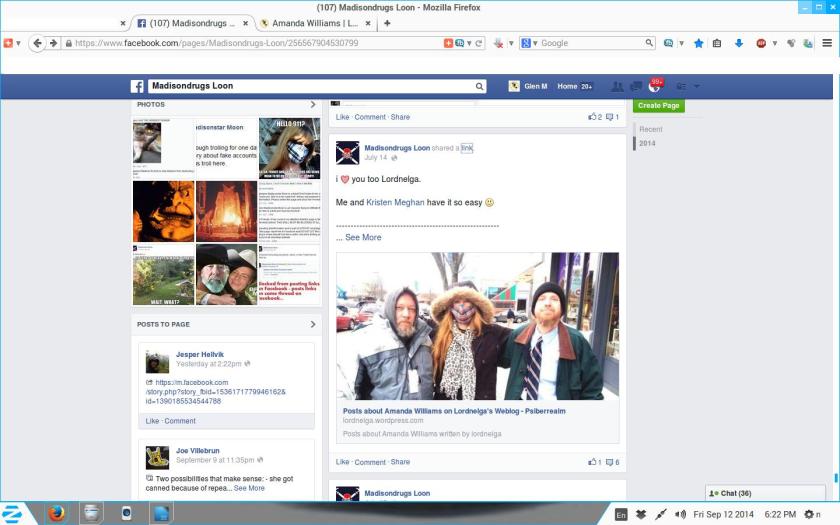 Slandered and ridiculed me, plus the fact you yourself have done the same damn thing you are accusing Amanda Williams of doing. Your pages are also full of copyrighted photos that you have altered and done whatever with. Everyone that shares a photo on fedbook is guilty of copyright infringement if you get right down to it. And so by what you have said what gives you the right to break the law by cyberstalking, cyberharassing and cyberbullying which are all violations of the law to enact your crap on her? What does that really say about you and your integrity?

If this mythical person, this photographer really was concerned about his copyright why hasn’t he taken her to court and enforced his copyright? Maybe because it’s just a piece of crap lie like the rest of what you push. So if she broke the law take her to court and charge her with the crime. All I have heard from you types is whine and piss and moan about crap. She threw me off her page, she won’t talk to me, whine snot crap… BOO HOO..

And how do these troglodytes get fedbook to do something that ordinary people can’t do is really getting me to think that these people are run by fedbook or are government shills. How they can report something and fedbook reacts, but the normal person can spend years getting nothing done without an act of god is staggering. I am calling them all out.

And yes I do understand copyright laws, having had all my work stolen and used all over the INTERNET with no compensation and no recourse, I fully understand it. What I don’t understand is how this gives you any damn right to do what you are doing. I also don’t understand why you have taken it upon yourself to crusade against Amanda Williams and make that your seemingly life’s work.

As for my integrity as a journalist, who again appointed you to judge anything. My integrity is based on whether or not I put out the truth, and if you are the judge jury and executioner of what I do, I am already damned because your integrity is very much in question. My reputation will be based on what I do, not what you say. And considering the fact that before I even had a chance to make my move your retarded butt buddies came and attacked me, I could now care less what you have to say because you have proven beyond a shadow of a doubt that all you are is a phucking retarded troglodyte whose word is meaningless.

If you were closer to me I would take you in a wrestling ring and beat the living crap out of you. If you approached me on the street and said half the crap you do on the INTERNET you would have a bullet in your head. I do not care for your damn threats and yes you may get a group of your lowlife piece of shit friends and come after me I fully expect that. That is after all what cowards do, gang up on people and mob them because in a fair fight you would get the crap kicked out of you. Plus if I’m such a nobody why am I a threat to you?

I have politicians, reporters, celebrities and other important people I talk to and communicate with. My reputation is what I make it, if they judged me and found me to be something I wasn’t then I might worry. I have been a press photographer since 1995-96, and yes you might damage me with your crap. I can’t care because if that’s all it takes to ruin all I have done then so be it. I fully expect people will listen to your crappy ass lies and made up shit they always do. The people that really know what is going on will see it for what it is and stand behind me.

All you are doing amounts to character assassination and lies are the perfect weapon for that. If you really were a man and had integrity you would stop this crap and go on with your life, but since your all low life scum sucking troglodyte’s vomit bed wetting living in your momma’s basement trolls I fully expect you to retaliate and come after me. So my next step after this if it keeps up, or you or your little butt buddies start your crusade against me, I will seek out the authorities and I will come after you. I better not see any fake accounts made in my name or your crap on my page again.. Oh wait you can’t because I have also blocked you, which I know will piss you off since that’s all you say about Amanda Williams. She blocked me and won’t let me pick on her. WHINE SNOT CRAP PISS MOAN.. Grow the hell up.

In closing I again want to thank those who follow me and support what I a nobody does. I do not take threats lying down and I do what the hell I say. It doesn’t matter to these idiots how much proof you have or what you can show because to them proof is irrelevant. They are only after the foam which is how much trouble they can cause. I have now become a “Jackass Whisperer”.

As always stay tuned and have a safe one.