Okay yet again here we go with another rant about fedbook and the content they allow to be on their site against their precious terms of service or what I am going to call from now on their “DO AS WE SAY” policy. I posted a rant earlier today about this but since several people have tried to report the page I posted and got the same response I did I feel it’s time to yet again go on the rant path and review what has been going on. Let’s start with a few articles I have written in the past about what has been going on.

People ask me how do you find these pages that you report well we go back to the article I wrote on 2013/07/08 https://lordnelga.wordpress.com/2013/07/08/facebook-what-else-follow-up-to-the-last-story/. In this article as you can see if you read it, it shows fedbook promoting stuff where only fedbook can put it. Now if it is all over the page how did I find it? Simple I didn’t they put it there and are in fact promoting stuff that is against their own damn policies.

2013/07/09 https://lordnelga.wordpress.com/2013/07/09/why-facebook-why/. In this article it shows fedbook pushing stuff that in fact goes against their terms of service yet again. Yet they expect and demand that you adhere to their every whim when it comes to your content.

Shortly after I posted my rant earlier I saw this on another group I’m in and asked the person if I could use their post in my article.

“Facebook just removed a photo from my album and then made me go through all my photos and made me affirm that I had nothing else that violates their community standards. What a crock!!” She also shared some of the photo’s that were said to be against their so called terms of service. And they made her go through every photo to make sure she didn’t have any more that violated their terms of service. See for yourself if you think any of them needed to be reported. Then look at the censored photos from the page I reported, which one would you report. 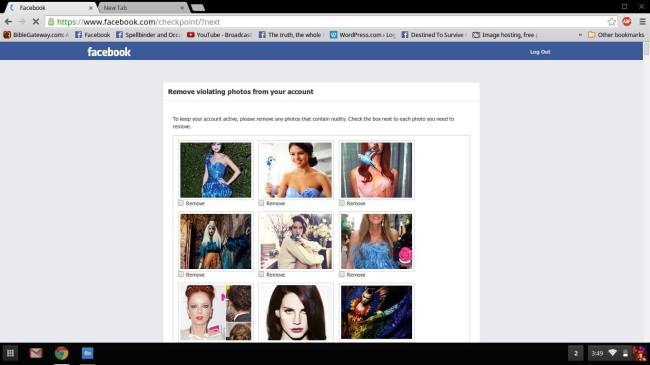 Okay I wrote this earlier and will include it here now again.

“Speaking of headaches, I can’t get my mind around fedbook’s obviously flawed reporting staff. Yet again they have gone out of their way to be stupid. Case in point this time. WE ALL KNOW I have had numerous run in’s with them and each time it goes to show that they do not care about their stinking terms of service or actually enforcing them correctly. I had a page pop up in the suggested groups or people you should know section, which I didn’t get a screen capture of, but I do have the pages link and the response back from fedbook on this page.

I will not include a screen capture of this page because I don’t feel like editing the photo to put it up. I have reported this page at least 3 times and each time I get this:

Please go report this page on fedbook to get it taken down.

As you can almost see in the little photo what this page is all about. SEX AND PORNOGRAPHY which is not allowed in any form on their site supposedly. ALMOST EVERY photo on this page is pornography. NOW I have no problem with pornography as a whole, but when it is against the rules and terms and regulations, and it is allowed to stay up when other pages with no such violations are removed with extreme prejudice then there is a problem.

Fedbook will remove pages for posting Christian values, will remove pages for saying that Muslims are bad, or breastfeeding mom’s pages or for several other non-existent violations of their terms of service. But when it comes to doing the right thing and actually following their own rules they have a problem following those rules. I am actually sick of them always doing the wrong thing.

People ask me why then don’t you leave fedbook? I say, Why can’t fedbook do what they say they will do? Why is it okay with you brain dead TROGLODYTES that they can spy and steal your data and keep files a mile long on you yet they can’t do simple things like following their own rules. Of course the more I look around this is the same thing happening in politics and the rest of the world so I shouldn’t even be surprised. The GOVERNMENT does the same thing and no one seems to give a damn.”

I decided to go and edit a part of the page just to show you what is on the page. 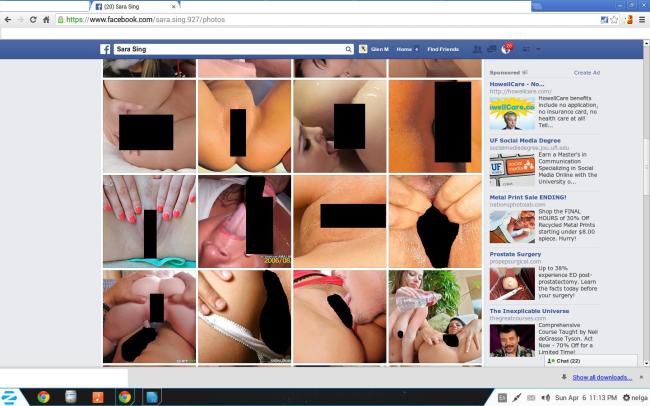 Now I’m not by any means the smartest person on the planet, never have claimed to be, but I do know what “NUDITY” is and also what is called “PORNOGRAPHY” and this page fits both to a “T”. Would you want your children to see this stuff right out in the open like that, all because fedbook can’t get their crap together and do what they are suppose to do? And what if it appeared on your wall or your children’s wall, what would you do then? And what if they did nothing about it except punish you for reporting it?

I get sick and tired of being blocked from reporting and being put in a “FEDBOOK JAIL” where I can’t do anything till the overlords of fedbook decide to let me out of it as long as I “DO AS THEY SAY”. Fedbook is great at punishing those who stand up and report stuff, or speak out about freedom and things that matter. As you see this has been going on for a long time and there seems to be no end to it, fedbook is starting to be a smut pit again and I get sick of trying to hold the line. But I do it for the children who don’t need this shoved in their faces. They get enough smut everywhere else on the Internet, there needs to be an end of this from fedbook who says they are doing so much to stop it yet time and time again they disappoint and never get the job done. As always keep your eyes open and STAY TUNED there will be more I’m sure.

One thought on “FEDBOOK Fails again.”

A daily selection of the best content published on WordPress, collected for you by humans who love to read.

Arts and Politics from the Armpit of America