I sent a few links to John Crudele of the New York Post last year and started an investigation into the thing you call Facebook, I call fedbook. Got a lot of action and things were told to me by fedbook that they have neither followed through on or even care about. Case in point, this video that I fought to get taken down and see what could be done to help the child in the video.

Well fedbook agreed that the video shouldn’t have been on fedbook and said something about this wonderful thing that worked so damn well and stopped all photos and such from getting on fedbook, it was called PhotoDNA, now maybe it only works on photos, I’m not to sure will do more research on it later. But I have seen numerous photos that were reported pop back up on fedbook and now this video has resurfaced. It was one I personal talked to Fred Wolens about and was told would be taken care of.

It now appears a year or so later that this video yet again does not fall under the terms of service of fedbook. I just reported it and under two minutes got the reply back. 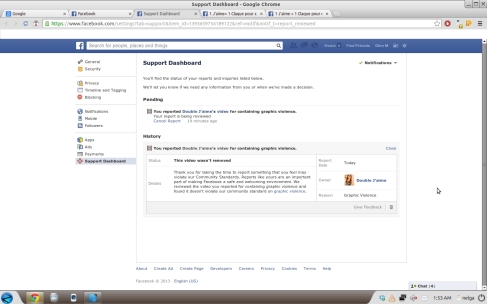 Please go report this video again. Make fedbook aware it has a responsibility to do what they said they would and follow their own policies.

Notice there are two instances of it so not only is it up it’s there twice, so much for their promises and such. They tell people anything they think the person wants to hear and don’t care about anything but their bottom line.

And before you condemn me I’m just the messenger, I didn’t post the video just bringing awareness to it and showing it as news. I am fighting this crud and don’t need to be made the bad guy for it.

This one is going to be short it’s to prove that fedbook doesn’t do as they say. More later as always Stay Tuned.